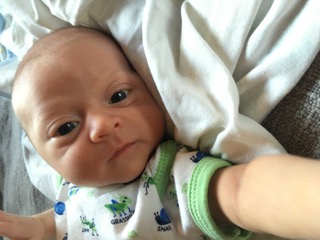 I would never have guessed at how suspenseful those first few days after egg retrieval and fertilization would be, waiting for the phone calls to tell us how many embryos had survived to that point. I hadn’t considered age and other factors, so when the first cycle produced no viable embryos at all, I was surprised and disappointed. That disappointment was a theme as we tried another cycle, from which we had two (chromosomally) “perfect” embryos, neither of which resulted in a pregnancy. I didn’t want to try again, because having two transfers with negative results was surprisingly emotional.

It took about a year for us to try again. This time, three embryos made it. Two of three embryos were transferred and both implanted. I finally had a positive pregnancy test! We were preparing our life for the chaos of twins, but we had the most disheartening and tragic outcome when early in the second trimester I lost them both. I was devastated and also realized that, at the age of 42, I was getting to the point where it was unlikely we would have a child. Although I had one frozen embryo left, I decided to go through another cycle of meds and an another egg retrieval to maximize the chances before it was too late. Unfortunately, this too ended unsuccessfully, so I had only the one left. With our track record, it was not probable it would work, but we had it transferred.

I did home pregnancy tests over and over, even though I was told it’s not a good idea. They were negative, over and over. I was mentally preparing to accept that we would never have a baby. The next morning, I took the last test and when the word “yes” came up I couldn’t believe it. I cried. I still tear up when I see the picture of that stick with “yes” on it.

Our very last chance led to the most beautiful boy. I now have the best baby ever! I’m so glad we didn’t give up.